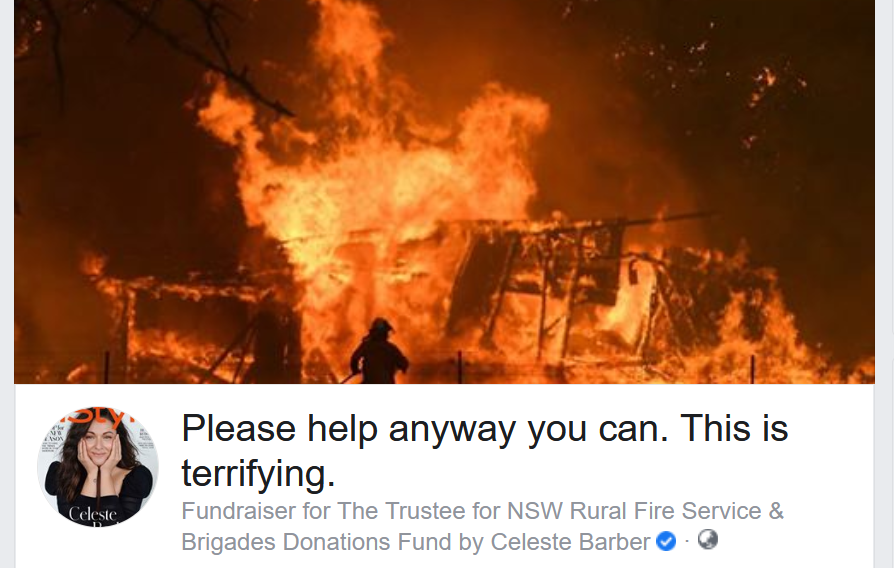 In January, at the height of the bushfire crisis, Celeste Barber’s Facebook donation drive for bushfire relief became the go-to fundraiser. Set at an initial target of $30,000, her post went viral with many celebrities reposting and asking their followers to donate. A whopping 1.3 million donations later, Barber had set the precedent for the largest-ever fundraiser in Facebook’s history totalling $51.3 million.

When it became clear that the fundraiser was gathering speed, Barber posted on Instagram, “So it’s going to the RFS and it will be distributed out… I’m gonna make sure that Victoria gets some, that South Australia gets some, also families of people who have died in these fires, the wildlife.”

But there was a problem with what Barber had promised. The RFS trust fund has rules that state that any donation needs to be spent on maintaining facilities and equipment, training of firefighters and administration costs.

Agreeing with Barber that the original intent of the fundraiser should be honoured, the RFS went to the supreme court seeking clarity on the use of the money. The court found that the rules of the trust stand and the entire amount must go to the RFS as originally stated.

In a statement following the judgment, Barber said she had hoped the money could go to other states and charities because it was such a large amount, but it “turns out that studying acting at university does not make me a lawmaker.”

What could have been done differently?

This case shows us that the laws governing charities and philanthropy in Australia are complex. An introduction of simpler laws to regulate deductible gift recipients would mean the problem with Barber’s fundraising likely would have been easier to resolve.

In an interview with Junkee, Ben Shepard, media manager for the RFS acknowledges that, “Ideally what could have happened at that time is that fundraising event would have been brought to a stop and then a new one started with new guidelines about where that money should actually go.”

But it’s important to remember the donations will go a long way supporting the NSW RFS and the volunteer firefighters who were injured last summer. And since state resources are shared with other states across Australia in times of need, the whole country will eventually benefit – directly or indirectly.

As Barber herself adds, “So the money will be in the very capable, very grateful hands of the NSW RFS.” She thanked everyone who donated and said, “volunteer firefighters are rock stars like no other. You will never know the depth and breadth of our gratitude…”